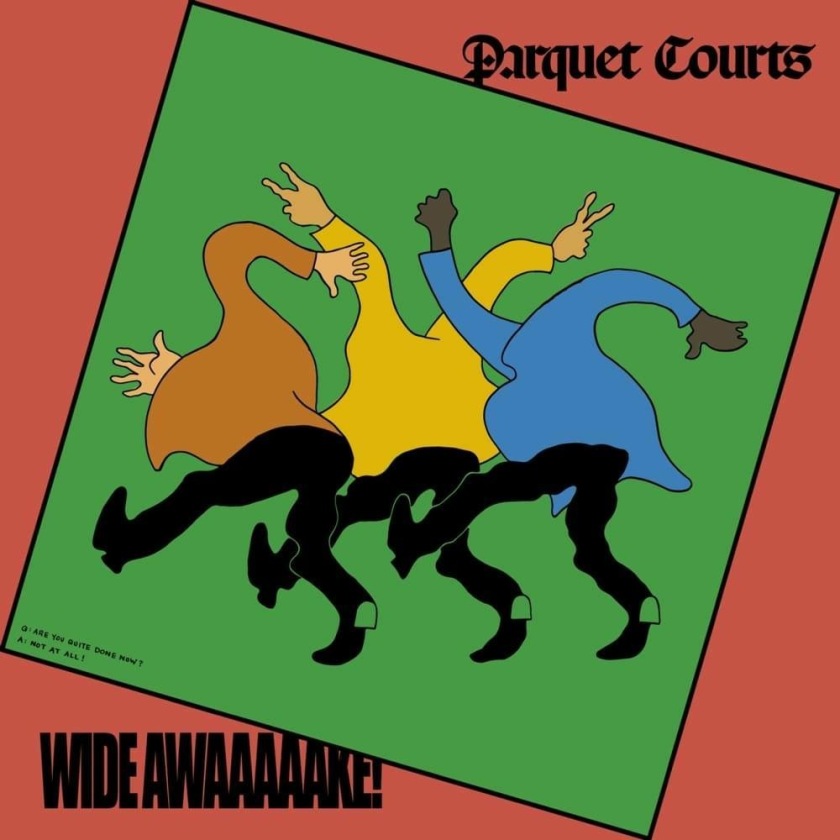 Finding a catharsis is a common goal with musicians. While many pander to the lowest common denominator of public musical taste to make a quick buck, there are countless artists using music to unpack and express any repressed emotions or overwhelming ideologies they deem important for the listener’s ear. New York based band “Parquet Courts” definitely had a lot to unpack and express on their new album Wide Awake! Following their incredible 2016 album Human Performance, an album that was melody driven and featured a diverse collection of the most impactful styles of “Rock” music, the band incorporates new styles from territories the band have not explored before on this stellar follow-up, and there’s a reason why this album is titled Wide Awake! Lyrically this features relevant topics. Topics like normalization and the desensitization of this country when reacting to the tragic and violent events that have become commonplace, but instead of diving into nihilism like most of their contemporaries are doing, the band offers a refreshing optimistic outlook. The album opens with the track “Total Football,” which may sound like an odd song title considering that the band isn’t exactly known for making songs that can get you amped at a sporting event, but the term actually comes from a tactical theory in soccer in which all players on a team can rotate positions, which can be the most successful display of collectivity if done right. The raucous delivery from the band on this track offers an upbeat and uproarious opening to the band’s most interesting album to date, and lead singer Andrew Savage tops this all off with the idea that collectivity is more effective than individualism, even though many of our infatuations lean towards the lone wolf aspect. More often than not in sports or really any form of entertainment individualistic qualities are coveted, that’s why many of us idolize celebrities, but things can be changed for the greater good if we unify and rid of selfishness. A. Savage realizes this, and he even shouts a big “Fuck you!” to Tom Brady. Musically the band continues to explore different territories throughout the album, but they never abandon what makes them “Parquet Courts.” The band flirts with various “Dub” aspects like on the tracks “Before the Water Gets Too High,” and “Back to Earth,” which feature infectious bass grooves and even some melodica. “Afrobeat,” “Funk” and “Disco” are cleverly combined on the album’s title track, and “Violence” even features some “G-Funk” synth lines, and what would a “Parquet Courts” album be without their signature explorations in “Post-Punk?” Oh yeah there’s plenty of that on tracks like “Almost Had to Start a Fight / In and Out of Patience,” and “Normalization,” and the fact that the highly regarded Danger Mouse produced this album is often forgotten while he allows the band to do their thing. The eclecticism of this album is often delivered in an upbeat manner, which makes it easy to move and dance to, but the lyrical content is a lot more serious in tone. It deals with the unfortunate reality that things like mass shootings and violence have become commonplace, and that at this point it’s difficult to know how to react to these situations since we’ve become numb to them. Instead of having a defeatist attitude, Savage’s vocal delivery and lyrics offer an optimistic attitude. “Well I can’t count how many times I’ve been outdone by nihilism,” Savage sings on the closing track “Tenderness,” and after the roller coaster ride of emotions and styles that take place on this record, including a touching expression of member Austin Brown’s view on death and how the passing of a close family member at a very young age changed his view on life forever on the track “Death Will Bring Change,” It’s nice to hear the band close on an upbeat and positive note. This is without a doubt the most insightful album “Parquet Courts” have released, and in these dire times we’re facing in this country, it’s nice to hear music of encouragement.